Renault has taken on the challenge of playing in the premium brands’ court with its Arkana. The ambition is daring: to conquer a new clientele seeking to stand out without necessarily paying a high price. Apparently, the bet has already been won. It remains to be seen whether the Arkana has the means to offer services of a new kind for the brand at the Losange.

Luca DeMeo, the president of the Renault group, announced it last January when he presented his strategic plan for the years to come: “Expect a revolution at Renault”. As it happens, the SUV Coupé is no longer one of the private hunts of German brands. Until then, if you wanted to distinguish yourself from classic SUVs with a model with dynamic lines, you had to move towards BMW, Audi, Mercedes or even Porsche, which all have developed a range around this type of bodywork. But today the alternative does exist with the Arkana. The Renaulution is on the move. It is possible to know the resale or trade-in value of your vehicle thanks to the auto Turbo rating of your Renault Arkana, the alternative to the Argus rating.

A new approach for Renault

For the little anecdote, initially Renault only intended to present the Arkana to the press in black, just to support the luxurious side inspired by this color. It is true that it suits him well, but it is clear that the Valencia orange hue of our test model brings a more dynamic spirit very welcome.

Moreover, we touch here a first important point: at Renault, we present the Arkana as a new elegant and sporty SUV. In other words, it’s a new approach for the brand that is launching here a less conventional vehicle, less rational than usual, in favor of charm and originality. The aim is to tickle the consumer’s emotional chord. And that’s interesting, because it is indeed the main ingredient of the premium recipe. An RS Line finish to accentuate the dynamic spirit

We thus find the codes of the genre, with a plunging roofline which gives it a slender look. The panoply is complete: 20 cm ground clearance, protective elements at the shields and wheel arches … Whatever the angle, we must admit that the design is successful. Much more than that of a Kadjar.

Renault even took the opportunity to equip the Arkana with the RS Line finish signed Renault Sport, in order to further enhance its character. So beware it’s a finish, it’s the sporty look without the engine that goes with it. This concerns the grille, the 18-inch rims and the exhaust in particular. But we can see that the Arkana was born with the genes of a high-end vehicle. He clearly displays it. However, this was not quite what was initially planned … 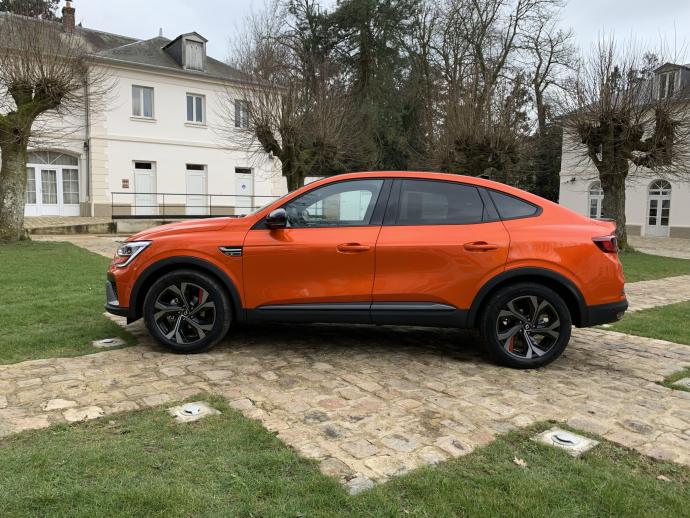 8 cm longer than a Kadjar

The Arkana, in fact, was launched in 2019 in Russia, then a year later in South Korea where it is manufactured and marketed under the Samsung badge. It was only in the face of its success that Renault decided to market it in Europe. And it didn’t happen with a snap of the fingers.

Because if the body is similar, it is not quite the same vehicle. The technical basis in particular was totally different. The Arkana operated a Dacia Duster platform, ideal for addressing the needs of Korean and Russian consumers. There was also obviously a certain low-cost approach, while our European Arkana has everything it takes to be in tune with the times.

In fact, to the question “Why did you wait so long to launch the Arkana in Europe? “, the response from François Laurent, director of the Arkana project, is clear: “We wanted it to be able to offer services that meet the expectations of European consumers, particularly in terms of safety. We also wanted it to be available in hybrid versions ”.

So the Arkana that we have today on trial is based on the same platform as the Clio and the Captur. Faced with the latter, the wheelbase has been stretched by 8 cm. And in the end, with 4.57 m the Arkana is even 8 cm longer than a Kadjar. 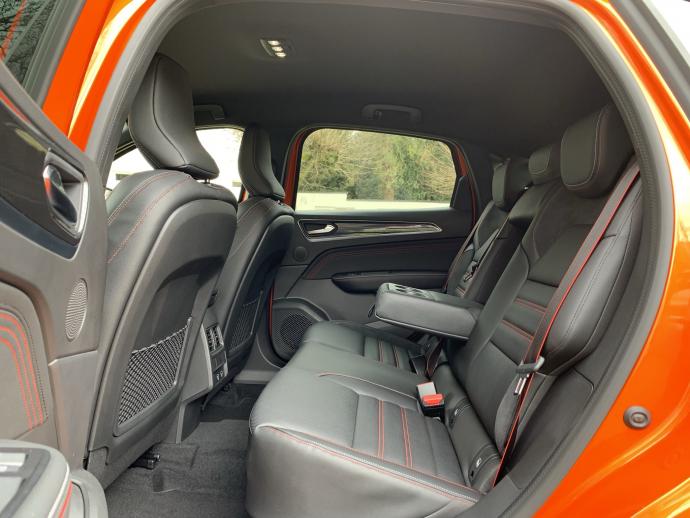 The first question that comes to mind when we discover this beautiful baby is: what about roominess in the rear seats, with such a plunging roofline? We feared compromises, with this bodywork more aesthetic than practical. But it is not because Renault had the good idea to tilt the rear seat a little more than usual, so that five passengers can travel relatively comfortably. The width recalls that the Arkana rests on a platform of a lower segment than that of the Kadjar, but the legroom is thus in the high average of the segment and the headroom even allows adults of 1.90 m .

The stretched silhouette also benefits the trunk offering a loading volume of 513 liters (478 liters in E-Tech hybrid version). We are not far from the 527 liters of a Kadjar and 520 liters of a Peugeot 3008. Access is generous, the double floor allows to obtain a very flat space if we fold down the 60-40 bench. All that is missing is an automatic tailgate close button. But overall, it’s very good. 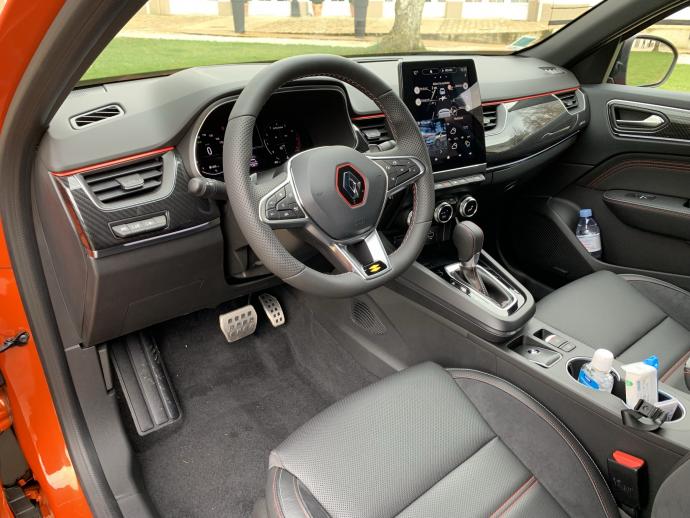 Even though the Arkana proudly exhibits high-end styling, Renault has not turned into a premium manufacturer. So how far has the recipe been taken? In fact, The Arkana takes over the furniture of the Captur as a whole. But he doesn’t really have to be ashamed of it because this one is particularly successful, both in terms of style and quality.

Moreover in this segment, even among premiums it is often necessary to resort to options to take advantage of materials worthy of the name. For once aboard the Arkana, we find a particularly ergonomic and modern dashboard, with a digital instrumentation unit combined with a large 9.2-inch vertical multimedia screen at the top of the center console.

We appreciate the imitation carbon plating underlined with red inserts and the specific upholstery for our RS Line finish, which provide a unique atmosphere in the category. The mood may be a little dark for our taste, but a sunroof will be offered as an option. And in view of what is offered on the Captur, we also trust Renault to subsequently bring a little pep in this interior, with different finishes. It is even said that Initial Paris is in the pipes. 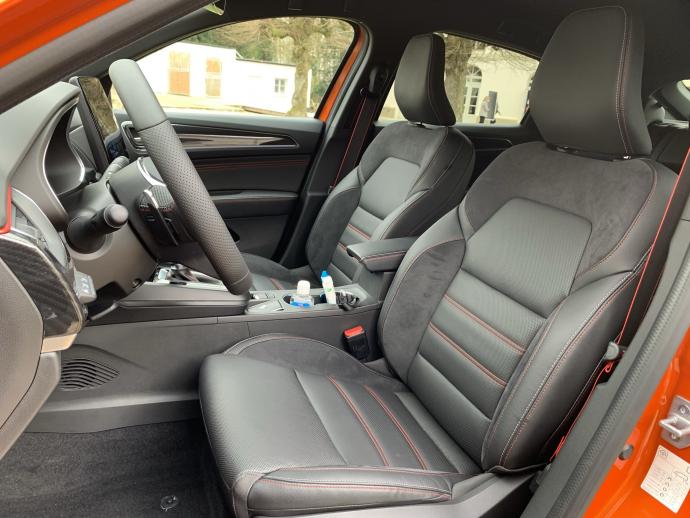 No Diesel on the program!

While waiting for the excellent 1.6 liter E-TECH hybrid of 145 hp which will arrive at the end of the first half of the year (followed by a 160 hp micro-hybrid TCE at the end of the year, and certainly also a plug-in hybrid), it will have to be satisfied with rather classic petrol units. As it happens our test model features a four-cylinder 1.3 TCE micro-hybrid 12v 140 hp. It is the entry-level engine. Like all the others, it will necessarily be coupled to the EDC box.

One of the main strengths of the Arkana remains its contained weight (1.336 kg), which thus makes it possible to be satisfied with small economic engines. So immediately forget a real Sport version equipped with a Megane RS block, just to harmonize the mechanics with the dynamic design. Today the sinews of war are CO2 emissions (the penalty would have been highly prohibitive), while the entire range is neutral here.

What is certain is that we fall back into the very rational with this TCE 140. Micro-hybridization is transparent to use, but Renault ensures that it allows fuel savings of around 8%. We have indeed noted a very correct 7 l / 100 km on average (consumption approved at 5.8 l / 100 km).

In view of the accelerations, we thought that the performances were a little better than those announced by the technical sheet. (0 to 100 in 9.8 s), which is a good point. On the other hand, the sound is not really exciting. And at full load at 6,000 rpm we even noticed a furtive vibration of the central furniture, unpleasant to the ear. It remains to be seen if this only concerned our test model during a future handling. 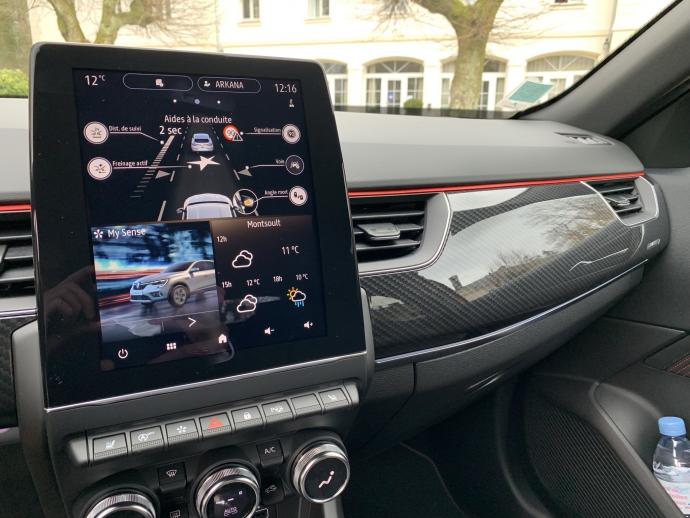 Before getting behind the wheel, Renault engineers told us that efforts had been geared towards driving pleasure, mainly through work on the running gear. Sport mode engaged, we immediately notice that compared to the other SUVs in the range, the damping is more rigid and the steering is a little more precise. The riding position is a bit too high and straight, but the well-contained cash movements allow dynamic driving without feeling heckled.

Comfort is not forgotten, far from it. And this may well be one of the main complaints we could make, because the Arkana is navigating between two waters in this way. Not really sporty, nor dazzling in comfort. The majority of customers will find it useful, but we would have preferred a sharper positioning, especially in RS-Line finish. The other finishes would then have served as alternatives for those who want a little more softness. 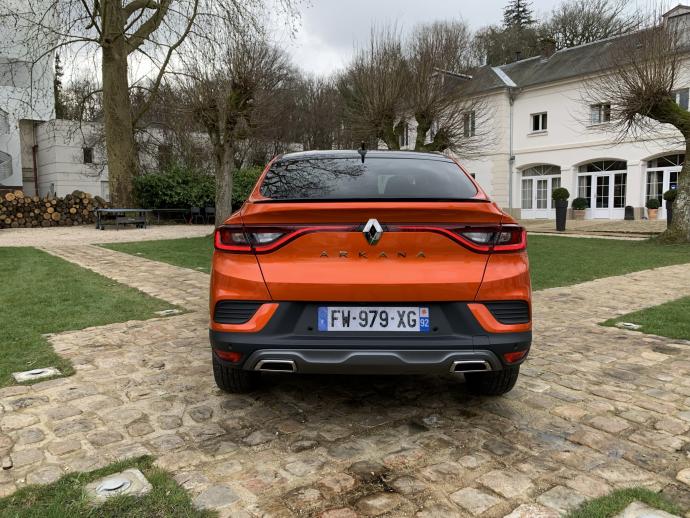 Car without a license: how much does it cost?: Models, tests, reviews and videos