Initially, the second generation V60 Cross Country was not to be released in France. Volvo, a specialist in the genre, has changed its mind and has offered its smallest breaker breaker with us since the summer of 2020. Fans of all-road getaways and allergy to SUVs will appreciate. Our essay.

The station wagon in field dress may be a niche, its following is solid and loyal. This somewhat special niche is also resisting, in the midst of the all-SUV trend, and is even relatively supplied. Between the Skoda Octavia Scout, Audi A4 Allroad or Mercedes Class E All-Terrain and A6 Allroad for the larger size, the offer is not lacking and almost all budgets are there to account (however well stocked, preferably). Volvo especially, one of the precursors with the V70 Cross Country in 1996 (and Subaru with the very confidential Legacy Outback), has always offered raised versions of its station wagons.

The second generation V60 Cross Country arrives as its big brother, V90 Cross Country, withdraws prematurely from the French market. Too expensive, penalized by our national penalty, and customers prefer the Germans. Even more expensive, but offered in 6 cylinders while the Swedish has limited its offer for a few years to only 4 cylinders. Alas, the only Volvo all-road station wagon available from us is therefore the most modest of the family. Everything is relative: as a reminder, Along its 4.76 m, the V60 is one of the large family estate cars. The Audi A4 Allroad will be its only direct rival as a premium. A little more affordable, Volkswagen also offers a Passat Alltrack.

Talented off the tarmac, placid on the road

Paradoxically, these station wagons dressed as adventurer chic taste more often dust and dirt roads than the majority of SUVs. Their public is generally resistant to these … and fond of outdoor activities. The skills of a V60 Cross Country outside the tarmac are not that far from those of an XC60, for example. Even in chaotic off-road, suspension and damping reserve a very high level of comfort and reassure… in all peace: smooth steering, high weight and hardly any dynamic claims.

It is possible to know the resale or trade-in value of your vehicle thanks to the auto Turbo rating of your Volvo V60, the alternative to the Argus rating.

The suspensions have been significantly raised (7 cm, bringing the ground clearance to 20 cm), adapted, and all-wheel drive is standard. Not permanent, the system remains simple traction in road conditions and conventional traction, but starts all the same by default in true 4-wheel drive. For the rest, the recipe is classic: shield guards and fender flares in raw plastic are the main distinguishing elements of a classic V60. Also note the basement protections extending over the length of the overhangs, to prevent any projections.

Certainly not enough to make the V60 a franchiser, which however does admirably on unpaved roads. After several kilometers on a path of sand, earth and gravel, dug with ruts, we retain the talents of comfortable and reassuring backpacker. Efficient traction and contained body movements and remarkable filtration make it a very pleasant traveling machine. The layout of our course was however terrible! The transfer of torque from one axle to another takes place gradually, without any sudden reaction. No piloted suspension or elaborate traction control, the Cross Country remains relatively simple technically. Well suited to the weight and size of the car, the micro-hybridization Diesel B4 develops 197 hp and offers interesting performance. But its ungrateful sound and banal consumption disappoint.

On the road, where he will logically spend most of his time, the results are just as flattering. Its overall comfort, of excellent level, is sometimes disturbed at low speed by sloshing, linked to a too firm calibration of the suspensions. But then everything is sorted out, and without being a king of agility, his peaceful and felted character sticks wonderfully to the car. The same goes for management, which would however benefit from being a little more communicative. The whole thing is nicer and more rigorous than most SUVs, anyway.

Diesel and micro-hybridization, to limit breakage

This beautiful partition, served in a cabin as neat as ever (very large and elegant, identical to the conventional V60), is unfortunately served by the the sound of 4-cylinder Diesel under acceleration, the only engine in the catalog. Not so invasive at temperature, but its metallic stamp swears in this cocoon. Too bad, because driven smoothly, the soundproofing is neat and the smooth running very real with the 8-speed gearbox (with conventional converter). 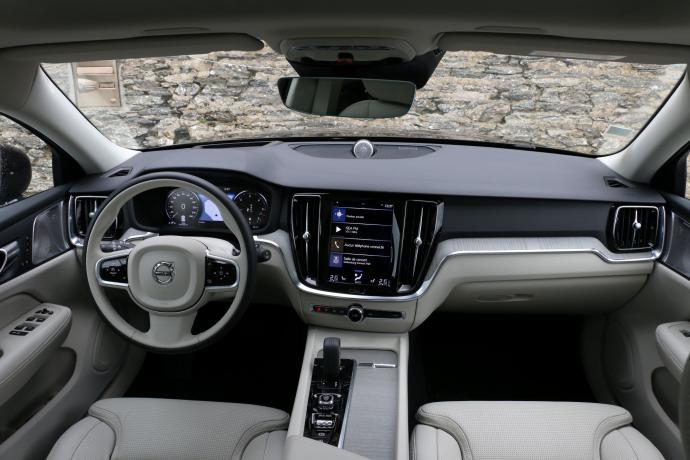 The interior is identical to the classic V60 station wagon. Neat, well finished and very spacious. The equipment is particularly comprehensive, particularly in terms of driver assistance and safety systems.

However, we can observe serious progress, since the D4 of the launch of the XC60 and V60, with this new engine called B4: it is actually the same 2 liters, enriched by micro-hybridization with 48V on-board network. The power has increased slightly in passing (197 hp, + 7 hp), and the performance is of good quality. (8.2 s from 0 to 100 km / h).

In use, the alternator-starter is mainly responsible for smoothing the stop & start (effectively successful) and maximizing, as much as possible, the change to freewheeling at stabilized speed. The objective is obviously to grab a few deciliters … to try to compensate for the effects of the four-wheel drive and its overweight. Already far from being light in classic bodywork, the V60 Cross Country is weighed down by around 150 kg. 1,850 kg empty in total! The strong torque (420 Nm), however, allows muscular revivals, despite this imposing mass. But no miracle: we recorded an average of 7.8 l / 100 km. Without being outrageously gluttonous, the figure is not exemplary for a modern Diesel of this level of power. 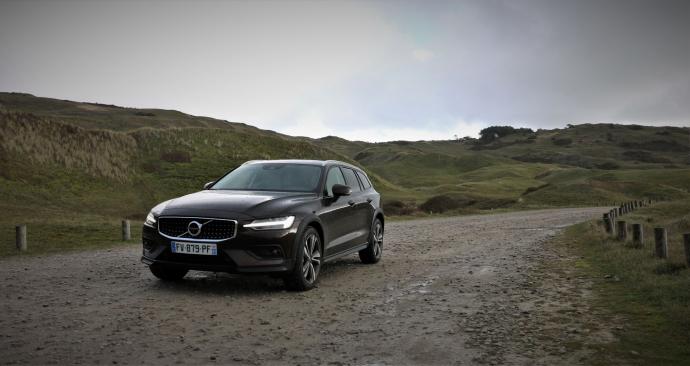 Chassis raised by 7 cm and wheel arch guards are the main distinguishing marks of the V60 Cross Country.

The V60 Cross Country is a bourgeois adventurer. Its prices start at € 55,900, which represents an additional cost of € 3,450 compared to the classic V60 with the same engine, in registration finish. More expensive than an Audi A4 Allroad which asks for € 51,970 for an equivalent engine … but a look at standard equipment, ultra-complete, argues without hesitation in favor of the Swedish station wagon. Leather, reversing camera, adaptive regulator and a whole panoply of safety systems are present automatically (prevention of collision of cyclists, warning and emergency braking in reverse …).

On the downside of the consequent weight and its consumption, the weight is hardly favorable: from 156 g to 170 g / km depending on the configurations, which implies a government penalty of € 1,074 to € 3,119. A plug-in hybrid T6 or T8, however offered on the rest of the range, would make it possible to escape it (as well as the TVS for the professionals). And even if it means suffering from the penalty, we would have liked to have the choice with a gasoline. Other markets are entitled to the T5 of 250 hp for example. 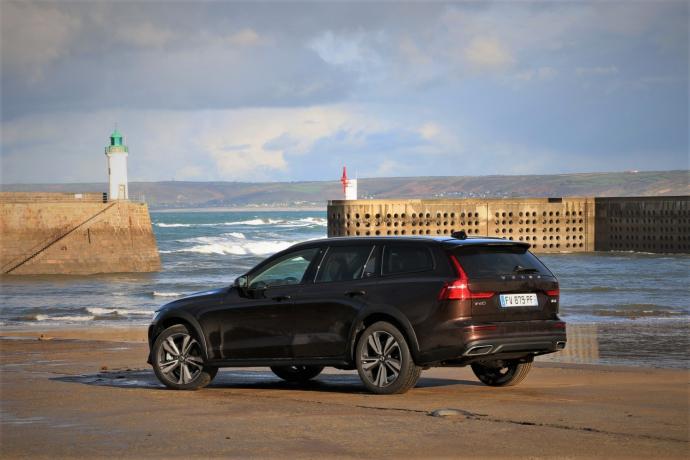 Count almost 56,000 euros in appeal prices for the Cross Country. Expensive, but the only finish offered displays a very complete endowment.

can the pioneer of the hybrid be king of the PHEVs?

a spectacular Porsche without Flat Six!