Mazda continues its road to premium with an update to its Skyactiv-X engine. Always more efficient despite an increase in power, this naturally aspirated 2.0-liter four-cylinder brilliantly represents the know-how of the engine manufacturer who does not give in to the ease of downsizing. However, if the smoothness and sobriety are there, the vigor is not really up to the small modern three-cylinder supercharged. But is this really a problem?

For those who do not yet know, Mazda aims to become a premium brand. This is already reflected in a rather wide range and a notable improvement in general quality, both in terms of design and interiors, or even chassis. In this case, our full options test model no longer has much to envy references. With its clean lines, large 18-inch rims and slippery roof, the CX-30 looks just as dynamic as its German rivals.

In terms of atmosphere on board, the ivory-colored leather upholstery and the two-tone “black and brown” dashboard set the tone: it feels like quite simply on board a Lexus. Astonishing! Especially since the standard equipment is very generous, as always with the Japanese. Finally on the road, this small SUV of 4.40 m reveals truly excellent seating comfort and cushioning. Even the general balance is almost perfect, with a slight tendency to oversteer which fits well with its philosophy. It is possible to know the resale or trade-in value of your vehicle thanks to the auto Turbo rating of your Mazda CX-30, the alternative to the Argus rating.

But this desire to move upmarket also involves a new engine offer. Indeed, while everyone gives in to downsizing in an attempt to respond more or less effectively to increasingly stringent antipollution standards, the Japanese engine manufacturer has been offering since 2019 an atmospheric four-cylinder with 2.0 liters of displacement, just as efficient as the small three-cylinder turbo competition.

Now renamed e-Skyactiv-X, this block benefits from a small optimization: the power increases by 6 hp to reach now 186 hp, while the maximum torque increases by 16 Nm to reach a maximum of 240 Nm. This is not stupendous, but at the same time it manages to reduce its CO2 emissions of 8 grams, falling to 138 g / km. Obviously, progress benefits proportionally to consumption now approved at 6.1 l / 100 km in combined cycle. There it becomes more interesting. It remains to be seen what this gives to use under the hood of the CX-30. What is a Skyactiv-X engine?

At Mazda, gasoline engines are called Skyactiv-G and Diesel Skyactiv-D. The Skyactive-X is supposed to combine the advantages of both worlds by offering both the responsiveness to acceleration and fuel economy of a Diesel, as well as the power at high speeds of a gasoline.

It is in fact a spontaneous combustion gasoline engine, capable of burning a very lean mixture. That is to say composed of a lot of air against little gasoline. Compression ignition allows the combustion of a mixture twice as rich in air as a traditional engine.

To popularize the point, the fuel is burned in the most optimal way possible, that is to say completely and very quickly, in order to develop a maximum of energy in a very short period of time. The objective is thus to reduce consumption, without sacrificing performance. 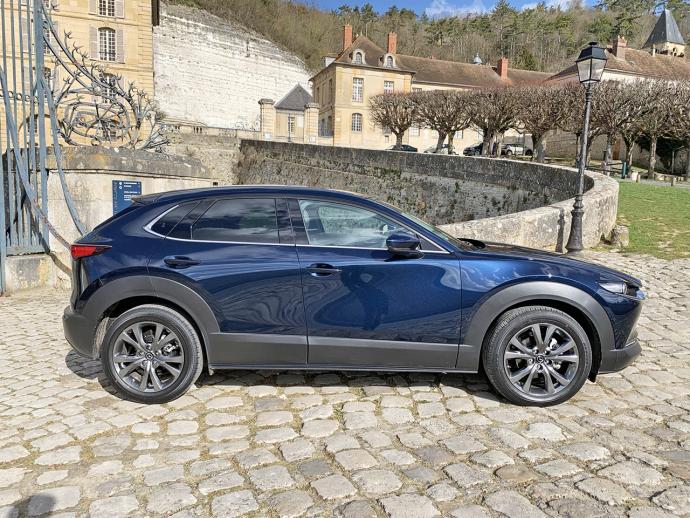 The latest evolution of this engine is now called “e” -Skyactiv-X, but it has always been equipped with a light hybridization with an alternator-starter and a 24v 10 kW battery. In use, this hybridization is completely transparent, but we appreciate the natural smoothness of the engine, much superior to that of the rough three cylinders. However, in comparison, the absence of overeating is clearly seen in terms of character …

What to wonder where are the 186 ch? Well yes unfortunately. At least when the engine is coupled to the converter box present on our test model. The shock combo! A particularly effective BVA6 also to reduce consumption – and very smooth when changing gears – but harmful to the sensations. Especially since it is clearly heard if we apply a little too much the accelerator. And that the reports are very long!

Moreover, it is useless to go for the 6,500 rev / min extension. Shifting from 5,000 rpm will have a substantially similar effect. And it’s a bit of the feeling that we constantly have: a constant lack of breath. Downshifting to 3,500 rpm will give the sensation of accelerating at full load under 2,000 rpm with an “ordinary” naturally aspirated engine. We’re not going to draw you a picture. Contrary to what is announced by Mazda, we have to deal with certain compromises. 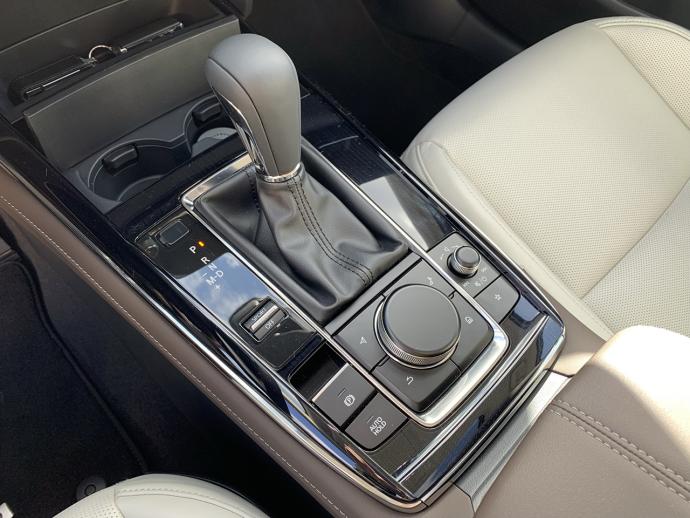 Nothing replaces a “big” engine

But in fact, this placidity is especially disturbing during the first laps of the wheels in town. In fact overall, to get started. Because surprisingly, the engine seems to display more temperament on the road, where it even offers a certain vigor in times. Confusing. Is the engine restrained at a certain speed in order to optimize consumption? No, but that’s the impression he gives. Anyway, with a reasonable weight of 1.4 tonnes to tow, its performance is nothing short of disastrous. 0 to 100 km / h is achieved in 8.7s. We just expected more temper from a Mazda SUV. What will happen with 5 occupants on board and the boot loaded? And in a 4-wheel drive version?

In short, all this well considered, as soon as one adopts a more peaceful conduct, the mechanics nevertheless reveal beautiful qualities. We even discover a good general harmony. In the city, smooth running gives the feeling of traveling aboard an upper segment model. On the road, the situation is identical thanks to a well-exploited torque allowing gear changes from 3,000 rpm. And at 130 km / h on the motorway (a little over 2,500 rpm), the operating silence literally makes the three competing cylinders pass for agricultural machinery.

We touch here a particularly important point because it is precisely on roads and expressways that downsized engines reveal their main weaknesses. At the same pace, the bigger a motor, the less force it is. And for once, the small engines require frequent downshifts and high revs to fill their small lungs. This necessarily affects consumption. While at the end of our test, we reached without forcing a very honorable 6.8 l / 100 km average. Obviously, that was the main objective for the brand today. And it is successful. 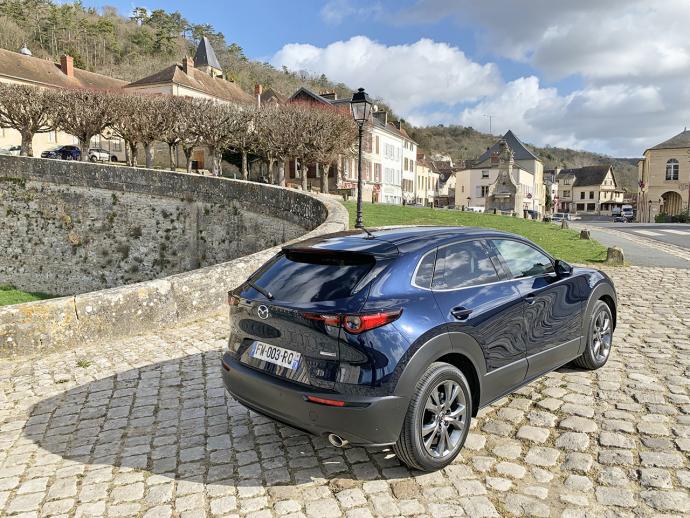