Home
Testing car
electrification is on its way!

Exit GTI! “Erasage” of garish red! Disposal of flashing shades! Berk! Not beautiful, finished all that! Let’s bury the 20th century for good! Place the 21st and these three new letters: PSE, for Peugeot Sport Enginereed, place for initials more reasoned for the time, scholarly, a bit pretentious, attached to Peugeot’s new sporting signature: a yellowish claw, for a logo to own color. It’s more trendy, but the reality is catching up with manufacturers towards more sophistication and interest in a better environment. In Leo, electricity appears in performance. Nothing supercharged. No. Too showy. All in nuance, without ostentation, to make the ride much more dynamic. Birth of a new breed of sportsmen. First grip.

After a major renewal and an unprecedented move upmarket, the French manufacturer is moving inexorably, like the others in fact, towards a useful hybridization: with the desire to reduce the carbon footprint and meet increasingly draconian standards …

Suddenly, Peugeot approaches performance and sportiness differently today by introducing a good dose of electrification in this sports news. The 508 PSE was born in this sense: the starting point of a new generation of hybrids, more technological than ever (46g / CO2). A task entrusted to the sports branch of the manufacturer: Peugeot Sport.

“PSE” is therefore a new label which pays tribute, in a certain way, to an almost unique know-how in French motorsport. This 508 PSE, the most powerful ever built, should be the first in a long line.

Located in Satory, in the Paris region, the Lion Motorsport entity, usually creator of racing cars, has therefore developed the future production sports sedan, presented as a world premiere at the 2019 Geneva Motor Show. The production car has also remained faithful to the features of the concept. It is possible to know the resale or trade-in value of your vehicle thanks to the auto Turbo rating of your Peugeot 508, the alternative to the Argus rating.

It took about 2 years of gestation to design a sporty 508 hybrid whose powertrain allows it to be a true four-wheel drive. The 508 has a classic heat engine, the 4 cylinder 1.6 liter Puretech 200 hp and two electric motors : one located between the heat engine and the front gearbox, with a power of 110 hp, and the other, at the rear, which offers around 113 hp. Combined power, actual: 360 hp.

Peugeot sport is intervened mainly on the chassis and undercarriages: specific adjustments on the controlled variable damping, on the width of the tracks (+ 24mm at the front + 12mm at the rear), on the lower car trim, Peugeot Sport has added an anti-roll bar to avoid rolling as much as possible, change the size of the wheels, now in 20 inches, and reinforced the braking system. The provider of sportiness also intervened on the rear electric motor to give it the desired torque. This new competitor of the BMW M340i, Mercedes class C 43AMG, Audi S4 and other Volvo S60 Polestar T8, has largely retained its original character. She is already so successful. The Brief? More finesse than brutality, measured lines not or not very ostentatious, a rather discreet overall character who admits without complex: “I have some, but I won’t show it to you”. Or not a lot! There are still these fins in line with the wheels that have remained (the concept’s rear quarter fins disappear for obvious homologation reasons), this specific front bumper with larger deflectors to breathe and cool the cavalry. For the rest, it’s a 508, lower by 4mm …

Before getting behind the wheel for a bit on the road, we wanted to know how this car accelerated: Peugeot Sport opened up a straight line of around two kilometers for us on the Satory military circuit. And it’s true that acceleration really changes, even with 90 kg more than a plug in hybrid version, without rear electric motor. The three engines in a “sport” mode work together. All the energy is distributed to all four wheels up to 190 km / h. Beyond that, the rear motor is cut off and the electrical energy is then concentrated on the front wheels to support a heat engine at full load. At this speed, the car only delivers around 260 hp. But the performances are there, indisputable: 0 to 100 km / h takes 5.2s (not bad for pulling, pushing 1900 kg), the maximum speed is restricted to 250 km / h.

There are five possible modes (comfort, hybrid, electric, 4X4, sport). And if the car makes it possible to play with the intelligence of the system, which cleverly combines many possibilities, it will be possible, for example in town, to drive 42 km on a 100% electric mode.

On the road, the first impressions are both surprising and enjoyable. Surprising because you have the impression of driving something other than a 508. At least at the beginning. Then you get used to it very quickly. Even if the heat engine remains too noisy and low in displacement for my taste, the car gives a force and a reactivity seldom reached by a Frenchwoman.

The steering is totally different, consistent, and responsive, with surgical precision. Pleasant, because this new 508 exudes a deeply mastered angry character. The car, already well-born, is only progressing and absorbing without flinching all this additional power. The reinforcement of the running gear, the anti-roll bar only participates in a high-level development. It works! 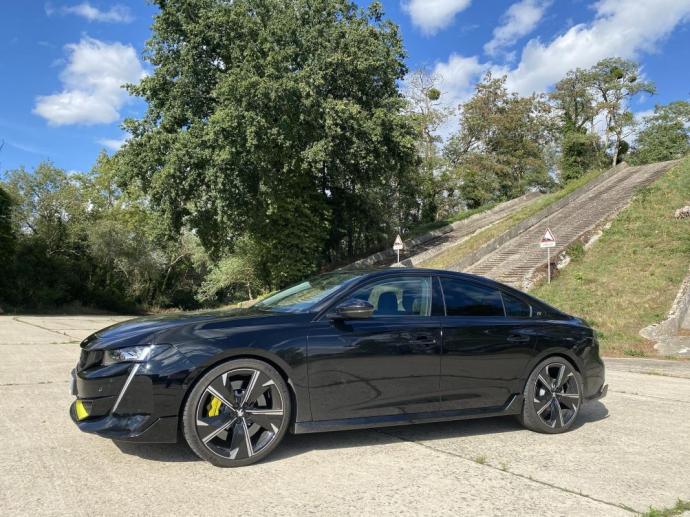 Whether buying a new or used car, it is important to plan for all expenses by comparing different auto insurance offers.