By declining its e-tron electric SUV in an S version, Audi offers us an impressive technological showcase. The monster’s numbers and performance impress, at least on paper. More than 500 hp to tickle the Tesla Model X, that would almost allow us to talk about sport.

Almost every Audi in the conventional lineup is entitled to its sporty S variant, after all. Even the insane SQ7, with an impressive and very quirky 435 hp V8 TDI. So why not the e-tron? Technically, the electric allows just about any fantasy possible. Adding engines is relatively straightforward if the platform lends itself to it. What Audi has done, since the e-tron S is entitled to two motors on the rear axle. The problem, on the other hand, is to reconcile an alleged sportiness with a mass exceeding 2.5 tonnes …

SUV, sporty, electric? The marriage of carp and rabbit, or how to combine three contradictory ideas. Apart from the commercial interest of offering a rival to the Tesla Model X, it is difficult to justify the raison d’être of such a machine. The financial argument, admitted half-heartedly, is very serious since by multiplying the electric models, a manufacturer is putting all the chances on his side to avoid the CO2 penalties now imposed by European regulations. The e-tron S, like the spectacular e-tron GT derived from the Porsche Taycan, are therefore fiscal sports cars, in a way.

Nevertheless, the result is impressive. Not so much on paper as at the wheel, because carrying kilos of batteries (here, 750 kg for the 95 kWh block) and grafting ever more powerful electric motors is not rocket science. Our elevators have been moving well this way for a good century. What is remarkable? To make drivable and, indeed, almost dynamic, a great fellow of this caliber. Like all S models, there is little to distinguish the e-tron S from a classic version. The S badges, new shields and fender wideners (+23mm) are the main clues.

It is possible to know the resale or trade-in value of your vehicle thanks to the auto Turbo rating of your Audi e-tron, the alternative to the Argus rating.

After the few S-specific body elements (23mm fender wideners, generously open bumper and new diffuser), the interior is quite similar to that of a classic e-tron. Refined and techno, the atmosphere is all-digital without lack of taste, for once. The sport seats of our “Extended” version, and a few discreet S logos are the only clues. Good news also for the trunk, still large (615 l) despite the two engines located on the rear axle.

At startup too, when the machinery shakes smoothly, nothing fundamentally distinguishes the operation of an e-tron S from a wiser 55 Quattro version. Torque galore, immediate, and cannon acceleration at a red light … As always. The first kilometers on the road are clear: the cavalry is there, and even if the temperament is logically identical to any battery-powered car, the S deserves its badge. 4.5 s from 0 to 100 km / h, which is 1.2 s less than the base e-tron. These are the revivals, too, which mark: in full acceleration, we have 503 hp for 8 seconds, and a maximum torque of 973 Nm. But unsurprisingly, at high road speed, as always in electric, the times are much less insane. Always a tireless punch, but very linear. The e-tron S benefits from two motors on the rear axle, which allows a finer and more efficient distribution of torque between the right and left wheels. Amazing agility, for a monster weighing more than 2.5 tons.

Under these conditions, it will be necessary to plan a serious tire budget for the huge 22-inch rims. The gums are the last link with the macadamia, and we have a lot to do here. Even if the electronics and the remarkable management of this new “Quattro” with three engines operate a very fine work to channel the avalanche of torque. Better, the presence of two motors at the rear (one per wheel) offers a semblance of agility to the mastodon, by varying the torque available on each wheel (the difference can climb up to 220 Nm between right and left) . Surprising: the e-tron thus rigged remains fairly neutral, and the assistance only comes to curb understeer on a really precarious surface, if one takes oneself to jostle it. What does absolutely not encourage the typing of the chassis and the air suspension. Very well held, comfortable although firmer, muffled as possible and … devoid of any feeling. Impossible to know what is going on under the wheels.

Fast, but not for long

Dynamically, Audi has a very successful showcase. Beautiful piece of engineering … paradoxically, anything but pragmatic. A few heavy braking quickly destroyed the brakes, however generously trimmed. Five laps of the road circuit at good speed, a series of avoidance and traction exercises, and the central pedal loses all consistency. Predictable! We will therefore avoid mistreating this beautiful baby. 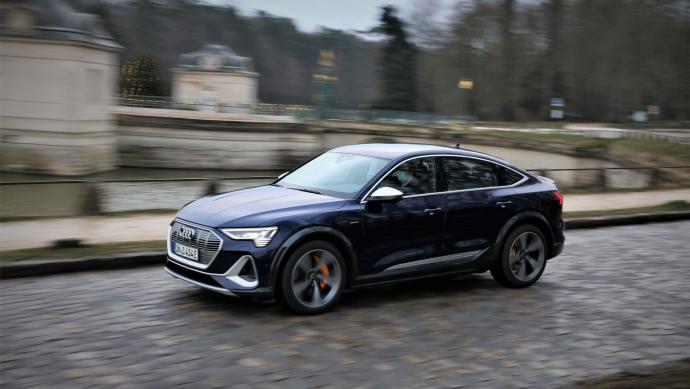 Athletic chronos, but reduced autonomy for the e-tron S compared to the classic version. The battery, however generous (95 kWh, for 86.5 kWh useful) empties in 360 km … according to official figures. Much less in practice.

More annoying, finally, is the impact of this additional power on the autonomy. From around 440 km with the classic e-tron 55, the range of the S drops to 360 km. Even much less than 300 km, taking advantage of the generosity of the three engines, or by lingering too long on the expressway. The 95 kWh (86.5 kWh useful in reality) then drop visibly. And braking regeneration, even activated to the maximum (via the paddles on the steering wheel), is hardly effective in town or on hilly roads.

As for the charging time, the e-tron may well be able to collect 150 kW per hour, this “performance” is very theoretical. If all goes well, an e-tron S therefore regains 80% of autonomy in 30 minutes, or a full charge in 1 hour. “Coffee time”, we are assured (with humor) at Audi. On the motorway, so charging 1 hour every 250 km, you risk reaching an overdose of caffeine. It is still necessary that the supercharger delivers its maximum power continuously, which never happens in practice. And confirms (again!) That the electric has absolutely nothing to do on long distance routes repeatedly. Diesel in town, do you find that silly and unnatural? It is just as much to travel the motorways of France on electric power. More suited to its purpose (daily and peri-urban use), an 11 kW wallbox can be recharged in around 8:30 am. 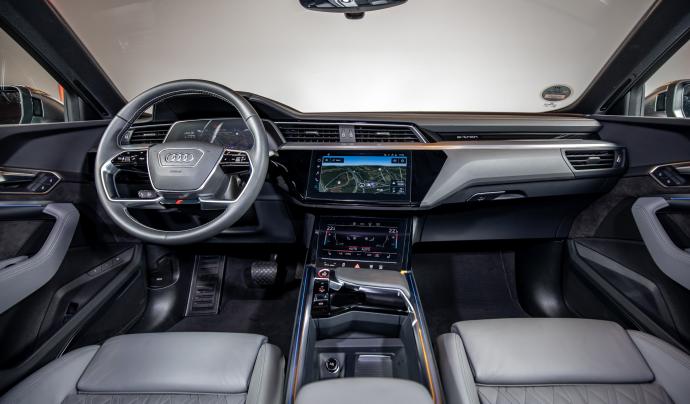 The interior is almost identical to that of the “simple” e-tron. Dressed up, techno and welcoming. Including for luggage (615 l).

Starting at € 99,200 in Sportback bodywork (€ 96,600 in classic bodywork), the e-tron S is not strictly speaking cheap. The additional cost amounts to 24,700 € compared to the basic 50 Quattro engine! He nevertheless remains competitive against his only rival, the Tesla Model X (minimum € 99,900). More powerful, but infinitely less refined and less well built.

At this price, the standard endowment is nothing exceptional. You have to look at the higher level Extended (112,200 €) to enjoy equipment that meets its rank of luxurious techno ship … and we will still have to dig into the options to be entitled to the “road assistance pack” with semi-autonomous driving level 2 (€ 2,450) or the parking pack with 360 ° cameras (€ 1,375 or € 800 depending on versions). Virtual mirrors, spectacular but totally useless (even sometimes dangerous), are still invoiced at 1,850 €. Expensive, just to show off in front of friends. More serious, on the other hand: the new Digital Matrix Led headlights, composed of 1.3 million pixels, allow the beam to be adjusted even more finely and quickly than conventional matrix headlights. The system can also send a light signal on a detected danger, such as a pedestrian or an animal near the roadway. 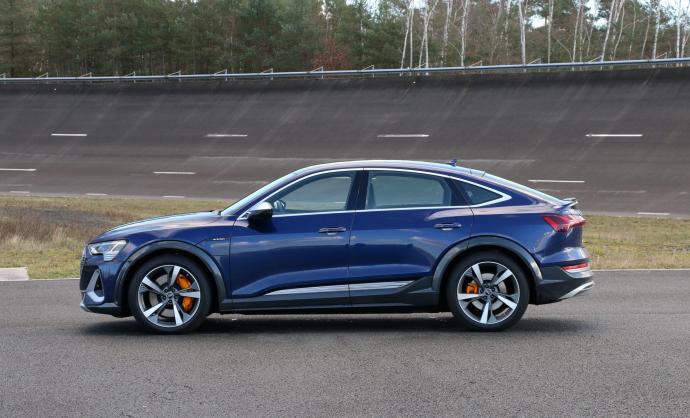