Despite the health situation, the United States continues to organize races and welcome the public. With some success, it must be recognized.

While France bans, postpones or cancels its events one by one, the United States maintains the calendar of its biggest motor races. After the Roar, which brought together testing and qualifying for the 24 Hours of Daytona last weekend, this Saturday, January 30, the race will start.

Admittedly, the giant camping area located inside the circuit, just like the “paddock tour” or a visit to the starting grid before the start of the race will not be on the program. But it is all the same a festive weekend, in the open air, which is being prepared on the coasts of Florida.

The Rolex 24 of Daytona is also the first round of the 2021 season of the IMSA championship, who had already achieved the feat of meeting his health commitments while hosting fans in the Michelin Raceway Road Atlanta, last November for the Petit Le Mans race. The French taken as an example

If, in the United States, social distancing and the wearing of masks were used as political levers during the presidential elections, the Biden administration has yet to change anything the Trump administration had put in place for entertainment and entertainment. And if the borders and the airways with Europe are closed again (since January 26), the shops, the restaurants and the places of entertainment remain open, with variable rules according to the states.

To secure their activities, the organizers of the 24 Hours of Daytona have implemented more stringent health protocols than what can be seen elsewhere in the country, inspired by what is done in Formula 1. But if the race remains open to the public, the atmosphere will not be the same as usual: the 10,000 spectators expected (compared to the usual 30,000) will be distributed among the 147,000 seats offered by the Daytona International Speedway. There is only one rule, which will then be easy to respect: everyone must observe a distance of 6 feet, or 1.80 m, from their neighbor. ” We know that everything is being watched more and more closely, and that there will be new rules soon, indicates Tony Ménard, director of Michelin Motorsport in North America, often cited as an example for having applied as of last March of the strict sanitary processes which have learned from other companies.

But in motorsport, everything is already well organized. As a sponsor of the IMSA championship, and as we equip 100% of the more than 100 cars participating in this competition, we are witnessing the effectiveness of the measures put in place.

Michelin is one of the leaders in terms of sanitary protocol in North America, we take charge of everything that happens on the business and production side (obviously in reduction, Editor’s note), because the most important for us is the people. Here, we have regular updates with our health and safety manager, together we review the race calendar, we study and reduce the number of people we move to the races. It is sometimes restrictive but it is necessary, and the results are satisfactory. “ 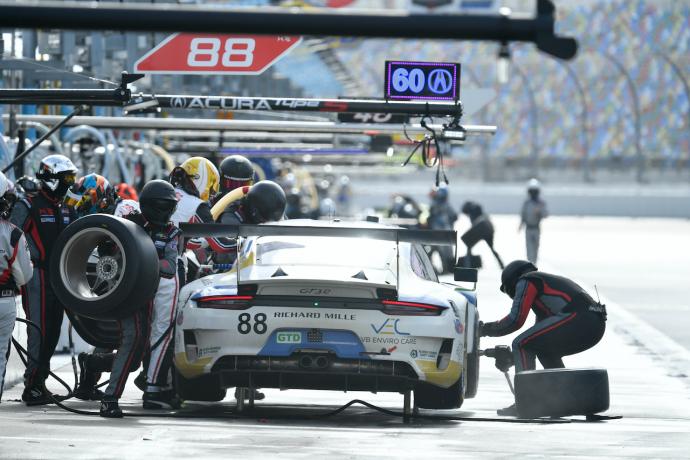 For the Daytona race, the rules have been further tightened compared to 2020. Each person will be in a “bubble” dedicated to their activity, and will not be able to leave it. “I will not be able, for example, to leave the” Paddock “bubble which has been allocated to me, with my team, to go to the Fan zone side to meet the Michelin guests”, continues Tony Ménard. “During Petit Le Mans, at the end of last season, I could still do it. Everyone has understood the risks, which we now largely limit thanks to our actions. “

Even though the situation seems more or less under control in the American motorsport world, we still see that business and marketing still partly drive decision-making. Closer to us, none of the FIA ​​disciplines say they are ready to welcome the public to a race, although they operate on a similar system and with numerous PCR tests (for those involved in the race). In America, the brands have chosen to continue to communicate, to invite customers and prospects to the circuits. Certainly with restrictions, but with a commercial, human and emotional bond preserved. And results that are good.

Beware of flying Peugeot 206s on the highway!