Plugging your car into an outlet to charge it is easy. It is also important not to get the wrong plug and cable. Explanations for those who are discovering the fascinating world of the electric car.

How to charge your electric car?

No need to go out of high schools to understand how an electric car works: unlike a vehicle with a good old internal combustion engine, which must be filled with fuel when its tank is empty when going to the gas station. , the electric car must be recharged via a power outlet. It is indeed its batteries, similar to those of a smartphone or a computer (but much larger!), Which allow it to run.

Until the turn of the century, the recharging of these batteries was generally carried out using conventional outlets, the same ones used to plug in your fridge, TV or computer at home. But with the strong development of these electric vehicles, equipped with larger and larger batteries and capable of going further and further, new types of plugs allow faster recharging. Let’s go through them all.

This is the easiest way to recharge your electric vehicle. It consists of using the universal cable supplied with your electric vehicle (known as the “Mode 2” cable), designed to be plugged into a standard household outlet. This technique has the advantage of costing nothing, since there is no need to install a special terminal. However, it has several drawbacks.

The first is that the high power risks on the long term damage to the classic socket, not designed to power a battery the size of modern electric cars. This is why specialists like EDF recommend connecting your electric car to a reinforced outlet, costing a little over € 400 installation included Here is a reinforced socket, the only “classic” socket compatible with the charging of an electric car over the long term.

The second disadvantage concerns charging speed. With latest generation electric vehicles, it will take more than two full days to go from 2 to 100% charge via a conventional outlet. A normal socket indeed provides around 2 kW of current. A reinforced outlet rises to about 3 kW. In one night, the normal socket will therefore allow about 10 kWh to be recovered from the battery of his electric car (about 15 kWh for the reinforced socket). Just enough to gain between 35 and 50 kilometers of autonomy on the vehicle. This is why this type of plug should only be used for troubleshooting, at home or when going on weekends.

So how do you go about recharging faster? The answer can be summed up in one word: “Wallbox” or “wall terminal”, for those who value the Language of Molière. In this case, another type of cable supplied with the vehicle must be used, called a “Mode 3 cable”.

This cable is no longer connected to a conventional outlet, but to a terminal specially built to supply the car with electricity from the house or building. The advantage of this technique, compared to that of the classic grip, is obviously found at the level of charging speed : a Wallbox sends current to the car at a minimum of 3.7 kW, which can go up to 22 kW depending on the performance of your home electrical circuit (i.e. at least 40 kWh recovered overnight). Instead of the 50 km of autonomy of the classic plug, it therefore allows you to recover around 300 km on your car in one night! With a home wallbox, your electric car can charge overnight

There, immediately, the time parameter poses much less problem. The only drawback is that the wall terminal costs more (generally a little less than € 1,500 including the installation). Fortunately, a tax credit of € 300 helps to soften this bill …

And what if you can not charge either at home or on arrival during a trip? This is the kind of situation where the use of public charging stations is needed.

The network in France is already substantial, it includes many public terminals with a power of between 3 and 22 kW. But when you really need to recharge as quickly as possible, you go to special terminals that use direct current (unlike all the charging points that we have just mentioned, which use alternating current).

Without going into the details of this technology which is oh so difficult to understand for a non-scientist, the charging points provide powerfule much more important. From 50 kW up to 350 kW, the equivalent of the electric power supplying between 10 and 50 houses. 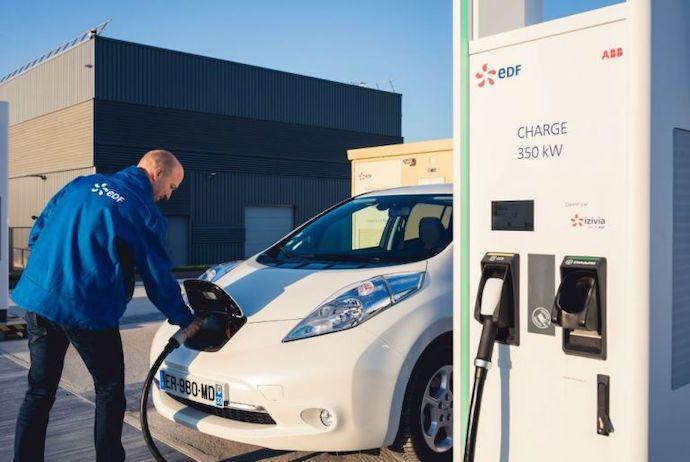 Thanks to the fast charging stations, you can fill up with electricity in half an hour

In these fast charges, we no longer use a car cable: it is directly the circuit of the terminal, via a much thicker cable to support the power of the current, which plugs into the car socket (said of “Mode 4”). Note that depending on the make of the car, this type of plug differs. European manufacturers use the “Combo” standard, Japanese brands prefer “CHAdeMO”. Don’t panic if you don’t understand anything, fast charging stations have both types of cables anyway. With a fast charging station, we can go from 0 to 80% battery in just over half an hour for the most powerful installations. These installations remain limited by the technology of the cars. But when these cars progress further, we can charge even faster …

The Kia XCeed on the test, the clever crossover

Mercedes GLB vs Land Rover Discovery Sport, the best of 5-7

Go on an electric car trip

Buying a used electric car: good plan or not?