The Volkswagen California, restyled at the end of 2019, has remained the star of converted recreational vans for years. However, the manufacturer also offers the size above, with the Grand California. You might as well ask the right questions to prepare for the moment when we can move around freely again. Who is the best traveler?

Here is a strange paradox, while a good part of the planet is preparing, gradually, to reappropriate the outside world: how can a reduced living space be synonymous with freedom? This is precisely the point of these utilities transformed into real ultra-functional campers, very techno for some, even luxurious. Converted vans, whether models originally fitted by the manufacturers or modified retrospectively, are popular. More and more popular, mainly with young and rather wealthy families, they owe their success mainly to one reason: the absence of the constraints of a real motorhome, and their much wider versatility.

The Volkswagen California is the pioneer of the genre. To date, and by far, it is the best-selling recreational trailer. Almost 20,000 sales per year in Europe, and the success is growing! In addition, there are the Multivans transformed a posteriori by fitting-out specialists such as Westafalia (which also subcontracted the design and manufacture of the California until 2001). Remember, moreover, that the California is none other than the camper derivative of the utility Transporter (and comes from the same site of Volkswagen Utilities, in Hanover).

Behind, others followed suit like Mercedes with the Marco Polo (based on the Class V) or Ford with the Transit Nugget. The French are not left out, but Peugeot and Renault call on subcontractors to produce the living versions of the Traveler and Trafic.

The heir to the legendary “Combi” from the 1960s has become gentrified over the generations. Always nomadic, but luxurious depending on the version! The retractable canvas integrated into the roof, which houses a berth, has almost become legendary. Kids love it, and so do we. We must admit that few cars allow you to go directly from bed… to the wheel, and to drive in pajamas (which we did). Heir to the legendary Combi of the 60s, the California has followed the same evolution as its first folk and hippie audience: largely gentrified! Our Ocean version, packed with home automation gadgets, asks for 75,000 euros.

The restyling in 2019 for the T6 brought some comfort optimizations: a box spring, better insulated canvas walls … but a sleeping bag is always necessary in very cold weather. The stationary autonomous heating, standard on our superior Ocean version, is very efficient in the cabin but its heat is difficult to distribute upstairs. It must be said that during our test in Nova Scotia, in the far east of Canada, the nights regularly gave us temperatures close to zero.

Obviously, in such a small space, everything has its place and a place is provided for everything. Each accessory, such as folding tables and chairs, can be stored to the nearest half a centimeter in the accommodation provided, and the handling of the rear seat, which can be folded out into a bunk, must be carried out taking care to organize everything methodically. Otherwise, it gets stuck! Once some organizational habits have been acquired, the bivouac in these conditions becomes royal. Reading lights located everywhere, USB sockets… and during the day, the floor of the upper bunk can even be raised to be able to stand up and cook without bumping into each other. Magnetic screens for the front windows and sliding curtains almost make it possible to make it completely dark. Advantage for those who sleep upstairs: they enjoy the decor thanks to the openings in the walls!

Before setting off again, the maneuver is simple and takes a few seconds (be careful not to leave a pillow or sleeping bag lying around). The roof folds up electrically via the screen located next to the kitchen unit. It is the control center of the “house”: everything is grouped there, from the interior lighting to the temperature of the water and heating, as well as the level of the gas cylinder. Another screen, located on the ceiling above the driver, allows you to control the inclination of the terrain by setting up for the night. And so sleep flat, without rolling on your side …
On the entry-level Beach, however, none of this. The equipment is more basic, you will have to play with your arms to maneuver the roof and the presentation is simplified. This allows the price to be seriously reduced (almost 50,000 euros all the same). At least, no fear of damaging the beautiful wood and aluminum-like finishes of the high-end versions when returning from the beach, wet and silted feet. The essential is there: you can always sleep four, and the front seats swivel to form a real living room, facing the bench. 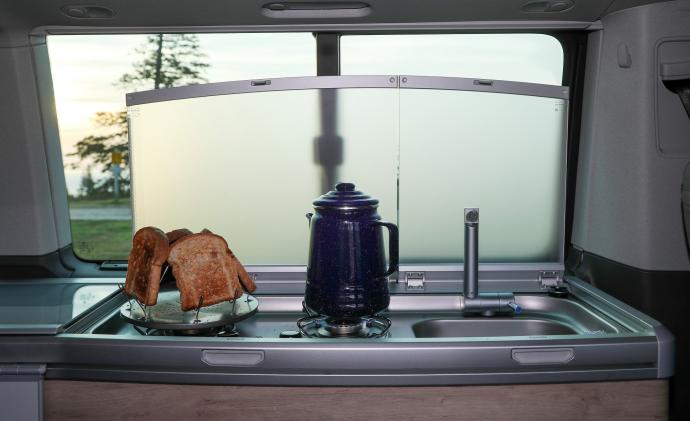 The kitchen unit is supplied by a 2.8 kg gas bottle, and there is 30 l of water reserve. Sufficient for the weekend.

The crossing of a Passat and a house

A novelty, seemingly innocuous, is appearing on the entry-level Beach. All now have a small folding hob, much less bulky than the kitchen unit that equips the Coast and Ocean, and sufficient for short-term getaways. The space freed makes it possible to install a 3-seater bench (2 for the higher models, which is also sorely lacking in support). The advantage of the trick is also financial: the California thus falls into the tax category of leisure vehicles, and therefore escapes our Franco-French penalty.

Apart from its revised look (mainly at the level of the abundantly chrome grille), the evolution of the T6 also concerns the driving position. The redesigned dashboard receives the latest digital coquetries from the brand’s classic models. Virtual cockpit, large central screen with connected functions… and driving aids are not left out: active maintenance in the lane, adaptive cruise control and driving aids with cameras. Not luxury, given its dimensions. 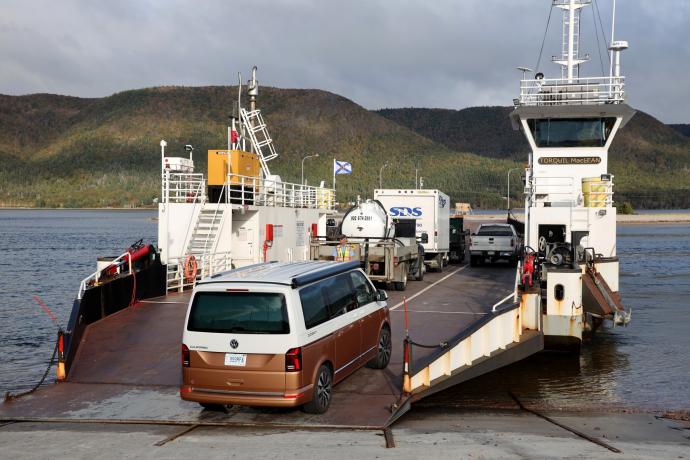 The California drives and behaves almost like a real car. At least like any big, placid MPV or SUV. The high-perched driving position recalls its origin as a van, and the inertia linked to the weight is important. 2.6 tons all the same! These peculiarities passed, the handling is easy and the kilometers follow one another peacefully. The 198 hp 2-liter TDI from our test is not too much to move the whole thing. Coupleux (450 Nm), it starts again without difficulty and reserves a good comfort of walk with the gearbox DSG7. Fatally, we say that the entry-level 110 hp must quickly cry for mercy.

This is precisely the main (and very big) point of divergence between the “real” California and the Grand California, which hardly share the name. Its big brother, a novelty that appeared in mid-2019, is actually based on the Crafter, the largest van in the Volkswagen family (5.99 m long, 2.42 m wide with mirrors)! So, an original utility that is much more rustic. The driving position is relatively basic: no question of digital instrumentation, nor of all-round driving aids. And the driving position, logically, is more of the truck than the minivan. 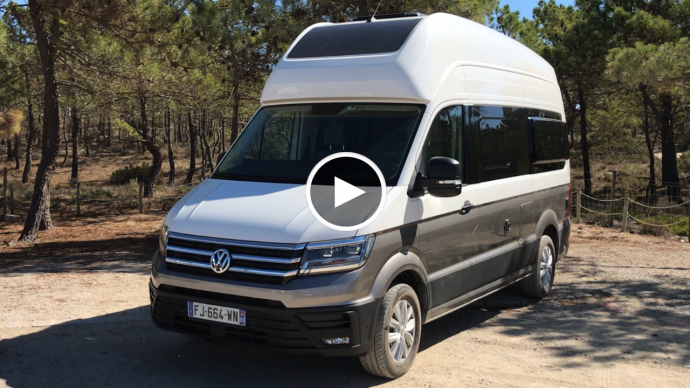 Basically, take a Crafter with a roof overcab, and fitted out like a conventional motorhome with a toilet, shower, 70 l refrigerator and comfortable berths with real mattresses. We sleep there like at home! The California, for its part, is satisfied with a simple shower to rinse off. The two vehicles actually serve a completely different purpose. Some people use their California on a daily basis, which in itself is not unrealistic. As long as we avoid passages that are too low in the ceiling, its 1.99 m is not a problem and some large SUVs are not much less bulky.

The Grand California, on the other hand, will spend most of its existence parked at home and only hit the roads for a few weeks out of the year. We are in a completely different world: that of the real motorhome, whose access is prohibited in most car parks (even supermarkets) because of its 2.97 m height and whose toll price falls within the category 2 (the classic California, considered as a normal car, remains in category 1). The T6 can almost be the family car of the household… The Grand California, certainly not.

Almost 3 meters high and 6 meters long: before boarding, pay attention to the size of the Grand California. Conversely, the T6 offers interesting versatility. Wash yourself or go everywhere, you can’t do everything …

Not at all the same constraints, therefore. And given the size, repetitive maneuvers are avoided. Fortunately, reversing camera and radars keep watch. For the long wheelbase version (6.80 m), it’s even worse: we are far from the ease of the California, ready to hit the road in a jiffy after a night spent in the open air (in an authorized space, of course ) and much less handicapped by its size.

In addition, its 2-liter TDI less powerful than that of the California (177 hp) ensures the minimum service to move more than 3 tonnes empty! With four adults and luggage for a long vacation, we are probably close to the 3.5 ton limit. Also pay attention to the sensitivity to side wind, which requires frequent corrections. These inconveniences should be put into perspective: the road services of the Grand California remain a cut above its classic counterparts (Chausson, Hymer, etc.). This is precisely one of the advantages of campervans over “real” motor homes. 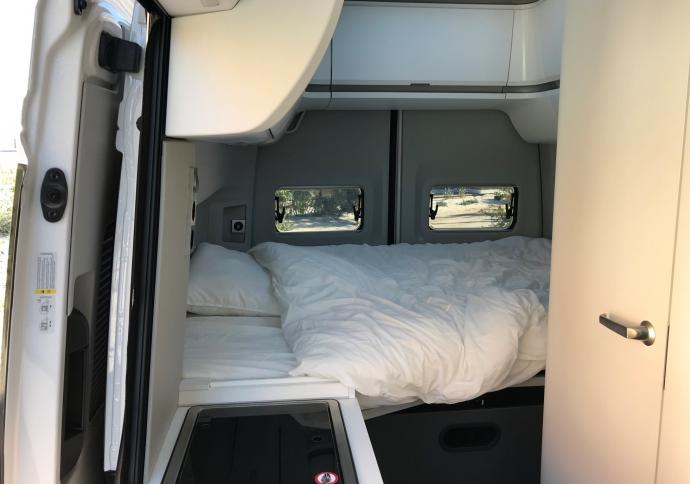 The bedding is comfortable, the reading lights and USB ports ubiquitous and easy to access. Stationary heating and insulation are efficient. Be careful, some pieces of furniture are fragile.

The integration of the furniture, the care taken in the finish, seem much more careful on board the T6. Fairly little noise, compared to the Grand California. This one is flattering to the eye, but the multiple closets and compartments feel lighter in design and cause some crackle. But here again, the living area is to be judged by comparison with its classic rivals: therefore, rather well studied and produced.

Improvised weekend departures, without worrying about access and route, nights in the heart of nature … The promises of T6 pay dearly. Almost as much, with equivalent engine and equipment, as the Grand California. This starts at 64,720 euros, when the T6 Coast (intermediate finish) in TDI 150 with DSG box asks for 63,310 euros. The prices climb quickly and exceed 75,000 euros in their high-end versions. Lots of hotel nights!

In itself, the price / comfort ratio leans widely in favor of the Grand California and its reception capacities. Traveling with four people is easier there than on board the little brother, who is necessarily more narrow. But the versatility of the T6 is much more appreciable.

The redesign of the T6 is particularly noticeable in the new grille. Among the new features, several driving aids appear: keeping in line, stabilization to counter side wind, etc.

what steps to take online?

numbers, letters and above all perfs!