The equation is simple: M5RS7E63S = 1237ch. This is not Einstein’s formula for the law of relativity, but I admit, in terms of speed on the road, this allows time to tick away very quickly. The Audi RS7 Sportback, the Mercedes AMG E 63 s and the BMW M5 Competition are clearly image products, real Germanic know-how machines, whose main attraction, apart from that of giving you the banana with each acceleration , is to determine which constructor will have the greatest … control. But not only.

Over the years, these SBF (Super Family Sedans) have invented a particularly exclusive versatility. Family-friendly, comfortable, super powerful, technologically advanced, they make just about all your fantasies come true. These premiums of more than 600 horses transport, with their backs taped to the seats, Pa, Ma, mustards and their bundles …

It’s a battle of engineers, who, in truth, have a lot of fun in order to respect rigorous and extremely formatted specifications. How do you turn a classic sedan into a real car with supercar performance?
How then to imagine that the Audi A7 Sportback, transformed into a fury Audi RS7, could take your hair off to such an extent? First, because the sedan with the Rings was born, beautiful and proportioned, and secondly, it really doesn’t have much to do with the “nice” version of dad! The RS7 reflects a hell of a lot of preparation made by Audi Sport. And the German devils only kept 5 small parts common to the Audi A7 : roof, roof, hood and front doors. The very athletic and sublime sedan from Ingolstadt, physically moreover closer to a coupe, offers the technical means of the icon RS6 Avant: 4.0-liter twin turbo V8 with 600 hp (800 Nm).

In Stuttgart, at the star manufacturer, we went, for the E-Class, by AMG. Aufrecht and Melcher, the two German engineers were right to invent in Grossaspach, the mechanical sports factory. Because since 1967, the AMG manufacturer preparer, working exclusively for Mercedes, has had the largest production of series sports cars on the market. And this E-Class is no exception. The stated goal? Also make Super cars pale with its big 4.0-liter V8 with 612 hp (850 Nm).

At BMW, it is just as serious in the development, the 5 Series goes through the mill. But we also have a lot of fun in practice with a very big preparation. “M”, a letter that has been reasoning since the 1930s in the world of competition. “Motorsport” transforms BMW series cars in Munich into de real performance machines.

The M5 competition is heavy, very, very, heavy and it is already the production of the 7th generation, absolute reference for family sedans for fathers and mothers, in a hurry … Here too, the V8, increased to 4.4 liters, develops a phenomenal power of 625 hp (750 Nm).

Our three Germans now exceed 600 horses! But to guarantee the passage of all this demonic power, they use and abuse simple or sophisticated devices, thanks to the electronics and which ensure an ultra impressive behavior thanks to the use of an intelligent all-wheel drive: disengageable Mxdrive for the M5 competition, Quattro transmission for the Audi RS7 Sportback, and 4MATIC +, with a drift mode, for the Mercedes AMG E 63 S. Theoretically, one could doubt the performance. Weight, the enemy of good, should make these critters, over 2 tons, unfit to break records and to make specialists’ cars blush. However, the doubt disappears from the first flights.

Full load! Horn ass! it scrolls! And to be convinced, nothing better than the runway (generally aviation, and in this case for us here, that of Deaux, near Alès, 1,400 m long). The wild horde of 1,837 hp is able to reach here in practice the 268 km / h. Afterwards, the risks of going faster intensify.

But the most astonishing, remains the Mercedes AMG E 63 S (3.4 s) because beyond this distance generally prized by manufacturers to establish lap times, the Mercedes becomes faster than the BMW. One more gear (9-speed gearbox), more torque of 100 Nm, a controlled weight, The AMG Star impresses with its “engine” qualities. 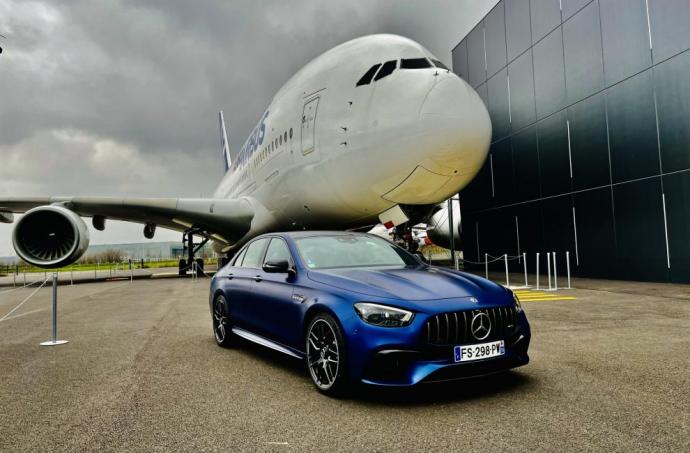 On the road: mastery of running gear, crazy in behavior!

We can only note, on the road, the excellence of their dynamic qualities. The inertia generated by the weight never really hinders their behavior. Rigor and mastery of frames, technical qualities of the running gear, engine power, speed of the gearboxes, ability to brake, and even, a cushioning comfort which makes its appearance in some cases. They roll, and roll! It’s just huge.

For a length of 4.96 m, a frame lowered by 7 mm, the M5, with its many driving programs, from “efficient” to “Sport +” (track mode), shows interesting athletic qualities: a very precise, rather rigorous front axle, while the rear, despite the careful management of the four-wheel drive, tends to get lost, out of overconfidence. Motorsport makes here a sharper M5 to drive than the other two. A weakness ? No of course not ! A real temperament that fits well in the genes of the manufacturer from Munich. Lots of character, but a docility that must be tamed. We will retain the use of the 8-speed gearbox with three levels of settings to increase the speed of changes!

Audi RS7 Sportback shows more efficiency. It is not necessarily faster, but it handles better, with flexibility, firmness, but ease. It unrolls as on a rail. It is not necessarily less heavy, but the quality of its running gear gives it an advantage. The Audi RS7, aided by its 8-speed Tiptronic ZF gearbox, offers great agility, despite its size. But it has in addition, what the other two do not have: two steering rear wheels. With this type of technology, especially when the car is large, it helps to reduce understeer, and therefore facilitate entry into a corner more quickly. And the “ceramic-carbon” brakes? A guarantee of endurance and performance: 11,000 euros option which, for once, makes sense. And then, we do not forget that it has more than 30 driving assistance systems. Just in case !

The Mercedes AMG E 63 S also remains expressive! She is the link between the two rivals. Extreme, sometimes, comfortable if necessary. At the Mercedes what! AMG, the beast, Mercedes, the beautiful. Wider by 27mm, the E63 S also has all-wheel drive and adaptive suspension, depending on the driving modes. The 4Matic + supervised by AMG, proves its worth here with the intelligence, like the other two, to guarantee the best traction by accelerating the outer wheel in the bend while braking the inside one. Without any weakness on the road, it can do everything, the 4.0-liter twin turbo V8 that we find today in the magnificent AMG GT, but also in a certain Aston Martin Vantage, distilled frome approval, many ranges of use, and breath, especially in raises. A delight. 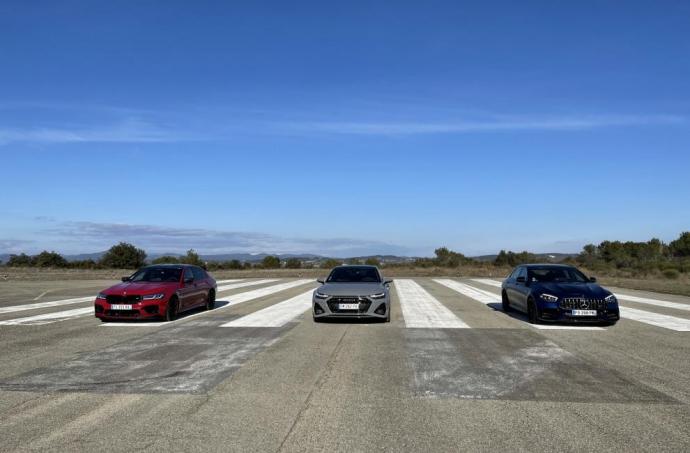 On the track, a different spirit.

It’s true, a few years ago nobody wanted to take this type of sedan on the track. Weakness of the upgraded production car which, in the long run, deteriorated too quickly. It was, quite simply, not made for that. Today, the opposite effect. She is no longer afraid of anything. What progress! The brakes hold, the engine is strong, the gearbox, let’s not talk about it, and the transmission? She doesn’t flinch anymore. We’re just forgetting the tires for once, okay? Thank you.

Our three models respond to exercise without flaw or weakness. They love and offer a lot of sensations. And the behavior varies according to the desires! Audi does not let go, whatever mode you want, even the most ultimate, his Quattro keeps watch. Fun, yes, but safe. Thus, the Audi RS7 further protects its occupants. The Quattro system, associated with the mechanical central differential, varies, up to 70% torque at the front and up to 85% at the rear, as required. Effective, but less funny!

The BMW M5 and its incredible MxDrive, disengageable 4-wheel drive system: 4 or 2-wheel drive, your choice! What class to have thought of it. Indulge yourself with a real propulsion. For the big guys! This system can thus switch from a super serene all-wheel drive mode to a super sharp propulsion mode: 100% of the torque and the 625 hp thus pass on the rear wheels alone.. And you have to give everything, control the drift, contain the power, control the inertia, hold the direction. What madness !

The Mercedes AMG E 63 S and its 4MATIC +, offers a device identical to that of the BMW. Good spirit ! Drift mode, in other words, real propulsion. Only you have to deserve it. The procedure is so complicated, that you have much faster to have fun with the all-wheel drive and the Sport + mode. The Mercedes, with its 612 hp, is permissive, even to try a few drifts. The must !