In the tiny galaxy of mid-size 7-seater SUVs, the Land Rover Discovery Sport had felt very lonely for several years. It has just been joined by a very dangerous competitor, the Mercedes GLB. An opposition of styles and philosophies.

Poor people carriers! Imagine them a few years ago, these kings of family vehicles could offer un monumental space on board, a demonic cargo volume and modularity solutions. They were pampered by families and a source of inspiration for engineers (a little less for designers).

And one fine day, everything collapsed because of a spoiler. The culprit was none other than the SUV, with its robust style, the dominant and reassuring driving position, and the considerable space on board. An SUV that has cast a wide net, even daring to seduce an often forgotten public, that of fans of 7-seater vehicles.

Although initially reserved for very large babies, the three-row SUV segment subsequently expanded to more intermediate models with the arrival in 2016 of the premium Land Rover Discovery Sport. Followed this year by its public enemy number 1, the Mercedes GLB. With its resolutely Land Rover look, Discovery Sport is a great success (500,000 copies). Its restyling last year allowed it to benefit from a new R-Dynamic finish as well as a profound update of its technical base and its on-board technologies.

For his part, GLB is brand new to the Etoile family. Very cubic in shape, one that makes one think of a reduced GLS compared to the usual curves of the brand. His adventurous style is totally assumed, and could remind a certain GLK with more than mixed success.

In terms of prices, the Land Rover Discovery Sport displays an entry ticket of 38,100 € against 45,350 € for the GLB. Our test versions GLB 220 d 4MATIC AMG Line 8G-DCT and Discovery Sport R-Dynamic HSE D180 BVA AWD are sold respectively € 54,450 and € 62,400. A price difference almost unchanged after the addition of nearly 10,000 € of options on the Mercedes and more than 8,000 on the Land Rover, which has the merit of showing that the English is more expensive with equivalent engines and equipment.

Besides, little meanness in the catalog, the third row is billed at € 1,311 on the Discovery Sport while it is standard on the entire GLB range. The GLB which takes advantage of its larger size (4.63 against 4.59 m) to offer a little more legroom (and head) in 6th and 7th places when the second row bench is in the normal position. Obviously, and as often, the third row of our two models will therefore be to be reserved for children or adults during short trips to avoid incessant appointments with the physiotherapist.

On the other hand, passengers in the second row will be greeted like royalty, especially in the Disco Sport. No need to elbows thanks to the wider width, or even tap your knees thanks to generous legroom. The GLB, however, does not have to be ashamed even if it is a little less spacious..

An observation that is repeated in the trunk with a big advantage for the Land Rover. In a 7-seater configuration, it offers more loading volume (193 liters compared to 130 liters), also in 5 places thanks to values ​​ranging from 780 liters to 963 liters (against 500 liters to 760 liters for the GLB) by sliding the rear seat (40/20/40) on about twenty centimeters (against 14 cm for the GLB). Only the 2-seater configuration is to the advantage of the Mercedes (1,680 liters against 1,651 l for the Disco Sport). Once the passengers are comfortable, it’s the driver’s turn to settle in. Unsurprisingly, the GLB uses the interior of the latest in-house creations with the famous digital double screen of which the part behind the steering wheel is reserved for instrumentation and driving data, and the central part for infotainment and vehicle parameters.

Resolutely modern, the presentation of the GLB takes the usual Mercedes gimmicks but adds a small adventurer-style element with a false chrome grab bar in front of the passenger. For the rest, we find a good quality of manufacture and a neat finish, with a few details.

Discovery Sport also presents very well. In a more conventional style it is true, but the perceived quality is superior. Note in particular the large central 10-inch screen managing infotainment or a gear lever replacing the old rotary control. The on-board instrumentation is also entirely digital but slightly smaller than on the GLB (7 inches). 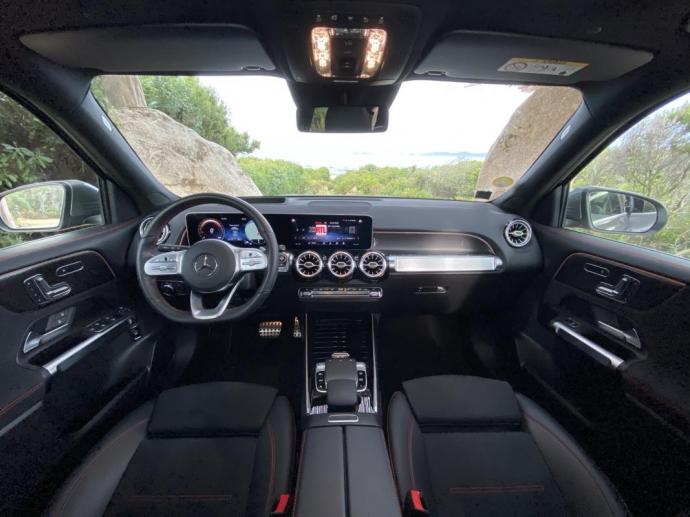 From a technical point of view, the two 7-seater SUVs of the day have some similarities since they are powered by two 4-cylinder turbo Diesel 180 hp (Discovery Sport) and 190 hp (GLB). They can also each count on all-wheel drive and automatic transmission, 9-speed on the Land Rover and 8-speed dual-clutch on the Mercedes.

In use, the Discovery Sport benefits froma good engine approval, torquey at low speed and able to revive the 1,900 kg of the beast. The pleasant surprise comes from the volume of the fuel oil content, which is quieter than that of the GLB. On the other hand, the Mercedes engine-gearbox combination is more pleasant thanks to better management of gear changes.

After several hundred kilometers on the winding roads of southern Corsica, the finding is clear. Discovery Sport is extremely comfortable, even without controlled damping (optional). On the other hand, it has a lot more trouble when the road is twisted, the understeer and body roll being far too pronounced.

Comfort level, the GLB has almost nothing to envy since it is well suspended and perfectly filters the roughness of the road. But above all, he can boast of being well more dynamic than its English competitor thanks in particular to a controlled damping to contain cash movements. Not enough to transform it into a sports car, the GLB being resolutely family-oriented!

Both SUVs can also count on interesting off-road capabilities. Especially Discovery Sport which benefits from a wide range of equipment dedicated to adventure. Among them, the Terrain Response 2 which automatically manages the torque on the axles in order to offer the best traction, or the many driving modes (mud, sand, snow, gravel), ford monitoring (up to 60 cm of water) or the very practical seen under the hood which allows you to keep an eye on where the Discovery Sport puts its wheels in off-road. In short, the Discovery Sport is a real Land Rover.

Will the gendarmerie afford the most powerful Peugeot?

numbers, letters and above all perfs!